Pendleton Ward
Orly Katan (Israel)
Shelby Butterson (title: Shelby the Worm Who Lives in Jake's Viola) first appears in "My Two Favorite People" and later returns in "Video Makers." He can talk and lives in Jake's viola. In "My Two Favorite People," he gives Jake the idea to hang out with Finn and Lady Rainicorn at the same time. He has the same tone of voice as Manfried. He also makes a cameo in "What Was Missing" when he crawls in and out of Jake's viola, and narrates the ending of "Holly Jolly Secrets Part II," where he and the general cast watch videos and wear sweaters. In the winter, he wears a green sweater with two candy canes on it. He appears in "Five More Short Graybles" reading a book while sitting on Cranky Cookie's statue, and has a major role in "Mystery Dungeon."

It should be noted that Shelby appears as an earthworm, and although earthworms are hermaphrodites he is a male as confirmed by Pendleton Ward.[1]

Shelby is a worm. However, unlike the other worm characters, Shelby more closely resembles an earthworm in color and shape. He is the color pink and has black eyes.

Shelby appears to be a highly intelligent, caring individual with a sense of humor for the most part, often imparting common-sense advice and knowledge to Finn and Jake. This is also shown in "Don't Look" as Finn sees Shelby as a nerdy bookworm type. However, in "Beyond the Grotto," it is shown that Shelby's knowledge is fallible, as Shelby makes a long-winded statement about a Sea Lard being a saltwater fish, referring to it as a stenohaline fish, a very specific marine biology term. When Finn tells the Water Nymphs they were looking for their Sea Lard to prevent him from dying because he is a "stenohaline fish," they tell him that a Sea Lard is a mammal. Finn remarks to Jake "I can't believe I just believed Shelby just because he is a nerd" to which Jake replies "I know, it's all in his tone" suggesting that Shelby has a tendency to pass off incorrect information to people because he says it in way that makes people believe he knows what he talking about but really doesn't.

Finn and Shelby are friends. In the episode "Video Makers," Finn formally refers to him as "Shelby, the worm who lives in Jake's viola." Though in the episode "Mystery Dungeon," he actually talks to Finn as a friend. After Finn lost his forearm in "Escape From the Citadel," Shelby was seen crying, and curled up on Finn's leg to comfort him.

Jake and Shelby are friends since he lives in Jake's viola. In the episode "My Two Favorite People" Shelby gives Jake helpful advice. He is an actor in both of the movies Jake attempts to make in "Video Makers" and "The Pit."

Kent was born when Shelby cut off his lower body while dancing. Kent is Shelby's little brother, so they are close. Shelby told Kent to fight bad guys leading to Kent being an adventurer and defeating the Rat King. He appeared sad when Kent had to return to the Dewdrops.

Shelby and Tree Trunks appear to be friends. In the episode "Five More Short Graybles," he said hello to her. In the episode "Mystery Dungeon," they appeared to be friends and had to work together alongside Ice King, Lemongrab, and Neptr. Shelby was the only one whose name she pronounced correctly.

Shelby never interacted with Lemongrab until "Mystery Dungeon" where they work together alongside Tree Trunks, Ice King, and Neptr. However, they must be comfortable with each other because Shelby rides on his head for part of "Mystery Dungeon."

Shelby never interacted with Ice King until "Mystery Dungeon" where they work together alongside Tree Trunks, Lemongrab, and Neptr. In general, he was annoyed by Ice King's myopia, desperation and selfishness, particularly when it was revealed Ice King had knocked the others out to be brought to the dungeon in an effort to get the Ancient Sleeping Magi of Life Giving to bring his Fionna and Cake fan-fiction to life (Shelby was particularly annoyed, as Ice King had planned to use him as fish bait, plus he would have brought something to be brought to life had he known). Later, as Finn and Jake watch Ice King and Neptr pretend Fionna is around in Ice King's Imagination Zone, Finn wonders if there's anyone sadder than the Ice King. Shelby responds with a dry, "Me, watching this."

In "The Empress Eyes," Ice King mentions attending Shelby's barbecue, though it is not stated whether he was invited or just crashed.

Even though they both live in the Tree Fort, Shelby never interacted with Neptr until "Mystery Dungeon" where they work together alongside Tree Trunks, Ice King, and Lemongrab.

In "Wake Up," Shelby mentions a "G.F." for whom he wishes for a pony from Prismo, instead of wishing for passage to the Citadel for Finn and Jake like they wanted. Shelby then immediately gets a call from his girlfriend on his cell phone saying she got the pony and named it "Speedboat." He then goes into Jake's ear to talk to her, though he appears to have some awareness of Finn and Jake's subsequent adventures in "Escape From the Citadel." 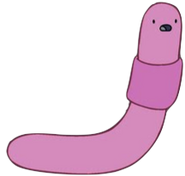 Shelby, the worm who lives in Jake's viola

Shelby, sitting on Jake's shoulder, with the main characters

"You should have told us—I would have freaking brought something!"