"Flute Spell" (mentioned)
Shark (referred to as "Sword Shark" in "Flute Spell") is a character that appeared in "My Two Favorite People." He comes out at the Tree Fort with Science Cat every day at 4:00 P.M. on the dot, and fights Finn, who decapitates both him and Science Cat. Most of the time, Jake misses them because he always meets Lady Rainicorn.

Shark looks like a normal shark in most ways, and he carries a silver sword. He is bipedal and walks using his caudal fin. His face is in front (his underside) instead of on the sides. His eyes are yellow and catlike with red pupils. 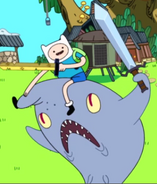