View source
watch 01:47
Episode “Seventeen” Recap
Do you like this video?
Play Sound

Seo Kim[2]
Somvilay Xayaphone[3]
"Seventeen" is the fifth episode in the tenth season of Adventure Time. It is the two hundred and seventy-first episode overall.[2]

A mysterious knight crashes Finn's birthday bash and presents him with a dangerous gift.[4]

Princess Bubblegum has the Candy Kingdom in lockdown until they find out what is happening with her Uncle Gumbald, so she arranges a small gathering mostly of banana guards and candy people, and a few of Finn's friends for his 17th birthday party, with carnival style games. A large green man enters and says that he has brought Finn an axe, but to win it, Finn must strike him.

Originally Finn declined, but then thought it may of been one of Jake's birthday pranks and chopped the man's head off, only realizing it wasn't a prank when Jake enters with a fake present. The man's head grows back, and he says it's now his turn to strike Finn. Finn suggests playing carnival games, and the person to get two out of three wins. If Finn won, he wouldn't get struck. The man put up a shield so it would be fair, and all of Finn's friends watched from afar. The first game was throwing coconuts at cans, which Finn scored four out of five, only missing the last shot due to the strange man's horse blowing air on the ball, causing it to go in a different direction. The man then knocked all five down on his turn, by cheating.

The next game was climbing a greasy pole, which Finn wins. The last game the man chose, which is arm wrestling, and Finn is certain he will win due to his new arm, however this is when it gets found out that the mysterious man is Fern, and he wins Finn by throwing him to the ground. Uncle Gumbald, cousin Chicle and Aunt Lolly then appear, as they were disguised as Fern's horse, as Bubble questions how they are back. Gumbald hints by saying "Oh my glob!" with Bubblegum realizing it is that they returned since Lumpy Space Princess reset the Land of Ooo in the Elements episodes, they were reset too.

Uncle Gumbald then goes onto rant that Bubblegum kept them imprisoned for centuries; she defends her choice by stating they were happy as candy people. Gumbald replies they thought they were but tells her not to feel guilty as he tries to change Princess Bubblegum into candy, as she has done to them many years ago. Before he can, Marceline shape shifts and guards PB and tells him to back off, in which he replies "the vampire girl is legitimately scary," though states as she has seen their superior technology and saw her champion fall, she'll realize she can't stop them. He ends by saying "We'll leave, for now" as they take off with Fern. Finn, disturbed by these events, is being consoled by Huntress Wizard as he says 'Worst B-Day Ever.' Right then, Jake and BMO trolley in his birthday cake which is a massive Finn Cake through the main entrance while singing happy birthday to Finn with the others joining in as well and circling around Finn who's sitting backed up against the wall and looking unhappy and Finn looks on, as the Ice King emerges from the cake dressed as Flame Princess, while the latter silently continues to look on in dismay, with weary eyes. 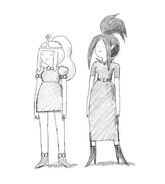 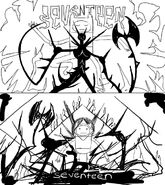