Ruler of the Glass Kingdom

See-Thru Princess is a character who appears in "Obsidian".[1] She is the ruler of the Glass Kingdom.

See-Thru Princess is a Glass Person who has a primarily orange body that resembles a dress with a bell-shaped bottom and peach-colored puffy shoulders. Her head and arms are yellow, and she has a protrusion atop her head with a red, diamond-shaped gem set in its center. She also wears gold ribbons around her neck and waist.

After she is broken into two pieces, See-Thru Princess uses her ribbons to pull herself back together, and the broken area of the lower part of her body gives her something akin to legs.

See-Thru princess seems to be aware of how fragile she is, and is constantly under pressure to rule her kingdom a certain way (sometimes by her subjects, but mostly by a trio of advisors who put perfection over compassion), but after a pep-talk from Princess Bubblegum, she stands up to those who "chip her cups" and starts leading with transparency (as in being honest with herself about what she thinks and feels) in spite the risk of being damaged physically and socially. This makes her a role-model for her delicate yet beautiful kingdom, thus keeping her in power in spite of gaining a large crack.

At some point in time, See-Thru Princess became the crowned ruler of the Glass Kingdom. 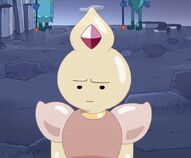 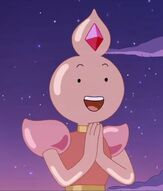