Season 6 Basil Twist Episode is an unproduced (and unnamed) episode that was intended to involve a collaboration with with designer/director/puppeteer and MacArthur Fellowship recipient Basil Twist.[1] The episode concept was conceived in 2013, but didn’t move beyond the early development stage.

Through a secret door in the trunk of an old tree, there is a secret theater where kids in cosplay are quietly taking their seats. The lights dim. On stage, live music is heard as the curtains part slightly to reveal a smal box, suspended above the center of the stage. A simple puppet how begins. It it the hero's journey of Cinnamon Bun.

Cinnamon Bun tries to fit in with the people in the box, but nobody likes him and the leader of the box tells CB to leave. He goes.

The curtains part some more, revealing more boxes. CB travels to the next box where he attempts to fit in and is soon told to leave. CB visits all of the boxes as the curtains keep expanding reveaing more boxes. CB is told to leave every box and he is cast out into the wilderness. The curtains part all the way as the boxes are uplled off stage. The set changes into a surreal landscape of billowing fabric. CB is wandering the wilderness, lost and alone.

Just when CB is at his loest point, he meets a friendly dog who wants to cuddle with him. The dog makes CB feel better and they begin traversing the landscape together, having adventures.

CB eventually feels pretty good about things and decides to return to the boxes with the intention of vanquishing his enemies and reclaiming what is his, but before he can get inside one, the very first leader who kicked him out comes out and meets him head-on. The leader starts yellling at CB.

The leader yells, but this time it doesn't work, this time CB doesn't run away, he grows and he becomes enormous! He's so big he has to crouch down to be seen by the audience. He towers over the little boxes and looks at the little leaders and watched as they lie down and turn into bugs. CB stands and bursts into stardust. 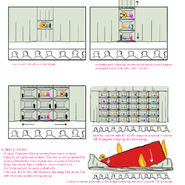 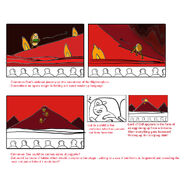 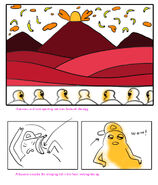 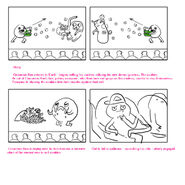 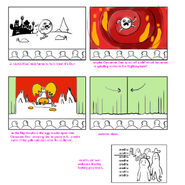 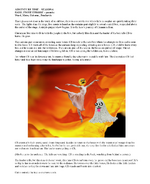