Scorpions first appear in "Evicted!" at Finn and Jake's cave party. Two giant scorpions briefly appear in "Death in Bloom" in the Land of the Dead. In "The Limit," Finn and Jake stumble upon a scorpion lair in the Labyrinth. Though their numbers were many, Jake holds them off in spite of their venomous stings. They also attack the Hot Dog Knights, but they survive since Hot Dog People are immune to poison. In "Lemonhope Part 1," Lemonhope fends off a trio of scorpions on the pirate ship by tooting his flute at them. In "Little Brother," a scorpion attends Shelby's viola party.

They sport a pair of claws in front and a venomous stinger tail in back. Their color varies, though usually it is dark purple or black. 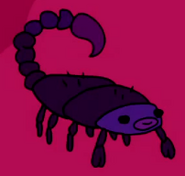 One of the scorpions from "Evicted!"

One of the scorpions from "Death in Bloom"

Scorpions attacking the Hot Dog Knights in "The Limit"

Lemonhope playing his flute at the scorpions in "Lemonhope Part 1"

The scorpion in "Little Brother" cheering on a centipede
Add a photo to this gallery
Retrieved from "https://adventuretime.fandom.com/wiki/Scorpions?oldid=798401"
Community content is available under CC-BY-SA unless otherwise noted.