"The Real You"
Science Guys make their appearance in the episode "The Real You," in which they attend Princess Bubblegum's Science Barbecue. They are machines who are interested in the fascinating ways of science and technology. After witnessing the creation and subsequent destruction of a black hole that Finn creates when he is insane with knowledge by using the Bubble creator, they proclaim the Science Barbecue the most exciting one ever. Some of them also appear in Issue 3 of the Adventure Time comics, when they are corrupted by the Ewlbo virus.

Some of them appear to be made of wires, computer circuit boards, calculators, or broken android parts, while others resemble BMO. In short, they are robots that range from a finished appearance to looking as if they have unnecessary parts or are simply incomplete.

A science guy that resembles a tape recorder 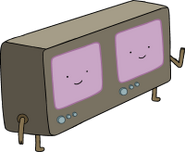 A science guy that looks like a twin monitor

A science guy that looks like the Mac icon

A science guy that resembles a calculator 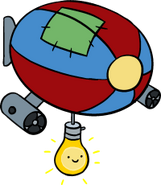 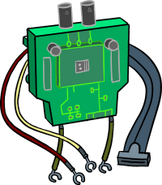