Steve Agee
Science Cat makes his first appearance in the episode "My Two Favorite People." Finn says he comes out by the Tree Fort with Shark at exactly 4:00 PM every day and can regrow his head when decapitated, which he usually does around 5:00 PM. Science Cat transforms Jake into a butterfly with one of his battle potions which, according to Finn, never last long. Jake would have liked to cut the cat's head off, but he had to meet Lady Rainicorn for their date.

Science Cat does not reappear until Season 7's "Flute Spell," where he mentions Shark died of old age. In "I Am a Sword," he brings a new companion, Spear Bear, for his daily fight with Finn, but notes Finn's heart isn't in it. He appears to have a relatively friendly relationship with Finn and Jake aside from fighting with them on a daily basis.

Science Cat is an orange tabby that walks upright. He wears Ray Ban glasses attached by a strap, appears to have a mustache, wears a short, white labcoat with what appears to be a pocket-protector, and has a mohawk. His status as a scientist is established by his labcoat, potions, and demonstrated knowledge of mixing chemicals. Unlike many scientists in the show, he does not have a Scientific Parasite in his pocket. 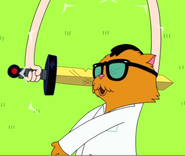