"Scamps" is the twenty-second episode in the seventh season of Adventure Time. It is the two hundred and twenty-first episode overall.

The kids set up their shell game booth and proceed to successfully scam Starchy, who is interested in playing, out of his life savings. Finn and Jake witness this and alert the Banana Guards. The Marshmallow Kids make a getaway through a secret tunnel, but Finn follows them and Jake corners them. Finn is about to take the Marshmallow Kids to juvenile hall, but upon learning of their underprivileged backgrounds and that they have apparently never seen objects as basic as trees, he decides to take them on a nature walk instead.

In the Cotton Candy Forest, Finn allows the kids to explore the wilderness, and all seems to be going fine until Gary falls into a river while crossing a log. Finn manages to save Gary, only to come back and find Johnny, Sunshine, and Hugo scamming a squirrel out of his nuts with the shell game. The kids laugh at him for getting duped and scamper off. Finn then receives a call from Princess Bubblegum asking him if things are going fine, and he does not reveal what has just happened. The kids are actually impressed at him for lying to the Princess and, convinced that he is a scammer like them, ask Finn to teach them his ways.

Finn proceeds to teach the Marshmallow Kids a variety of wilderness tips, including building a shelter, picking berries, and starting a fire, using scamming lingo to get them to understand him. Night falls and Finn, satisfied, decides to take a mental picture to remember the trip, but in the process he accidentally stumbles into quicksand. He asks the kids to toss him a nearby vine, but they are unable to comprehend this simple task into scamming terms.

They find themselves forced to "go old-school" and rough-house the vine into dropping to reach Finn, and when he escapes they tell him that they were unable to scam the vine into being a rope and are therefore unworthy of his mentorship. Finn tells them that they were never scamming anything at all, and were merely going camping. The kids are shocked and impressed that Finn managed to scam them into thinking that they were scamming. Finn insists that he was not pulling any scams, but eventually gives up.

The next day, Bubblegum arrives at the Candy Kingdom Preschool to check on the Marshmallow Kids. Finn directs her to the window, and she is pleased to see the kids finding joy in using "scams" to learn mathematics, geography, and reading. Meanwhile, Finn and Bubblegum catch Jake, who had earlier been impressed by the kids making $500 a day with their shell game scam, trying to pull the same scam on two bystanders. 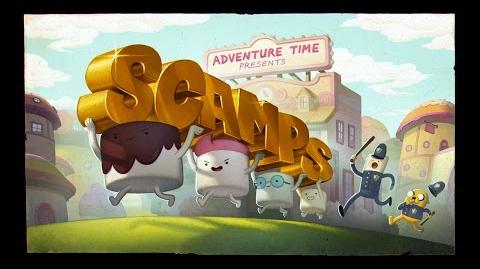 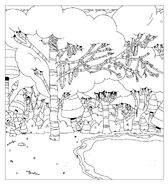 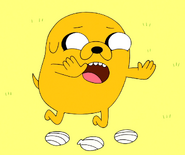 Scamps storyboard panel
Add a photo to this gallery

Retrieved from "https://adventuretime.fandom.com/wiki/Scamps?oldid=814104"
Community content is available under CC-BY-SA unless otherwise noted.