SMOs are the security guards of MO Co. who appear in "Be More." They act like stereotypical police officers, enjoying donuts and coffee, and also sport a police hat-shaped rim on their heads. There are at least ten of them. They hold laser guns as weapons.

The SMOs are large, dark-gray MOs with small, green screens. The letters "SMO" are written in red on their sides. Their back parts are similar to the backs of mid-to-late 90s PCs, and they handle dark-blue, cylindrical guns. 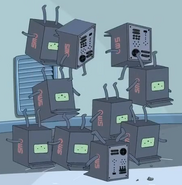 Add a photo to this gallery
Retrieved from "https://adventuretime.fandom.com/wiki/SMO?oldid=812328"
Community content is available under CC-BY-SA unless otherwise noted.