Adventure Time sometimes includes secret messages written in a runic code. This code is a substitution cipher using a traditional runic alphabet similar to the one seen on this page, or to the runic alphabet used in the Ultima games. Plus, some of the runes (A, O, and S) are the same as letters in Dwarvish writing in J. R. R. Tolkien's The Hobbit.

The following table includes only the letters so far confirmed by messages seen in the show. 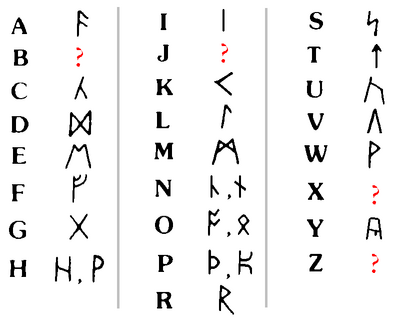 Note that the writing in the show does not necessarily match 100% with any historical language. Some letters appear to use more than one rune. The differences arise because the magic sword in "Web Weirdos" uses a form of runic alphabet similar to Elder Futhark, while the other runic messages in show use later medieval forms of certain runes.

A secret message appears on the pitcher that Finn uses to pour drinks in "Video Makers." It appears to translate to "Cuth of mæny æle" in Anglo Saxon runes. However, at one point in the animation, it seems to change to the rune for A. Series character designer Andy Ristaino has stated the message should be "Cup of many ales,"[1] although the S does not appear on the pitcher. The Cup of Many Ales also appears in the episodes "Card Wars" and "High Strangeness."

In "Morituri Te Salutamus" the message written on the Fight King's sword appears to clearly translate to the sentence "To fight is to live."

A secret message appears only once on the staff of the Forest Wizard when he bashed Finn on the head with it. If the image is flipped horizontally, the runes spell "FACE."

In the episode "Web Weirdos," the magic sword that Ed gave to Barb has runes on it. Although it was difficult to read in the episode, the prop design sheet revealed it in more detail. The most likely translation is "I am a skeleton. I wish I had skin."

If this is accurate, then three letters ("H," "O" and "N") use different runes here than they did in the previous messages.

In "Five More Short Graybles," a banner appears on the wall of the guitar shop. It appears to read "GUITAR REPAIR."

It is interesting to note that, while the alphabet used in the series is, indeed, runic, some characters are used improperly. For example, the character þ (thorn) is used as if it were a P. However, in actuality, this character was used by Germanic tribes to express the 'th' sound. This character was used even after the Latin alphabet began dominating Europe and did not drop out of existence until the late Middle Ages, although it still exists in Icelandic. It was initially reinterpreted as Y (e.g. Ye olde Shop), but then was later replaced by 'th'. A sign in "Five More Short Graybles" uses a different character to represent P, which is closer (but not identical) to the rune peorð which represents P in the Elder Futhark alphabet. 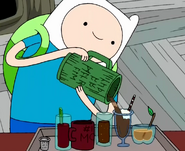 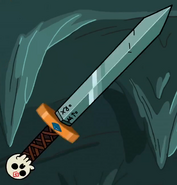