Royal tarts are a delicacy in the Candy Kingdom and are produced in the Tartorium. The tarts are served only at the annual Back-Rubbing Ceremony, which takes place at the Royal Congressional Hall. They are considered the most delicious treats in the Land of Ooo—so tantalizing, in fact, that criminals will risk their lives just for the pleasure of a single bite. The tarts themselves are very hard to create as they must be perfect. The Royal Tarts are carefully taken from thousands of reject tarts which are "full of imperfections." The Royal Tarts are carefully stored and transported in an anti-gravity container to maintain their perfection and are carried through the Royal Tart Path.

To protect the Tarts from theft, the Royal Tart Toter is assigned the task of safely delivering the tarts to the annual ceremony. Sadly, the original Tart Toter has grown old, blind, deaf, and tragically insane, thereby rendering him unable to fulfill his duties any longer. In "The Other Tarts," Princess Bubblegum originally considers entrusting the tarts to Cinnamon Bun, but ultimately chooses Finn and Jake instead. Princess Bubblegum initially tells Finn and Jake that she will be decapitated if the tarts fail to reach their destination, but she later admits that this was merely a lie to deter Finn and Jake from eating the tarts. 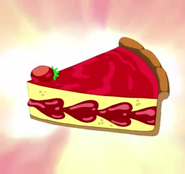 The Royal Tart Toter with a plate of tarts 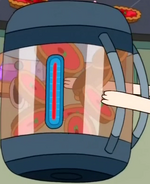 Butterfly with a poisoned tart
Español
Community content is available under CC-BY-SA unless otherwise noted.
Advertisement