In the caboose of a train

In "Mystery Train," Finn obtained the root sword (the name is non-canonical), which became his primary weapon. He finds the sword on the caboose of the train and uses it to attack the conductor. He next uses it against the Monster in the beginning of "Belly of the Beast." It is seen briefly in "Mortal Recoil," when Finn throws it at Ice King. He stopped using it after receiving the Demon Blood Sword and did not use it again until "Normal Man," after the Finn Sword was destroyed. He keeps it in a makeshift pocket on the side of his backpack. It can be seen again in Issue 1 (although the comics are of dubious canonicity). 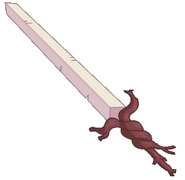 Finn's first fight with the Root sword against the conductor (Jake)