"Root Beer Guy" is the forty-third episode in the fifth season of Adventure Time. It's the one hundred and forty-seventh episode overall.

In this parody of hard-boiled detective stories, Root Beer Guy claims Finn and Jake kidnapped Princess Bubblegum, but no one believes him.

The episode starts with Finn and Jake tickling an ogre while Princess Bubblegum and some Candy People hold hands in a circle around him. The ogre laughs, releasing some of the Candy People from his mouth. The Candy People cheer, except for Root Beer Guy. He is fascinated, but does not seem to care at the same time. He heads to his workplace and scans his card. He looks back and sees the ogre run by with Finn and Jake chasing after him wielding swords.

Root Beer Guy walks into his workplace and then sits at his desk in a small office, which appears to be a call center for telemarketing. He gets on the phone and tries to sell someone an "amazing vitamin supplement." He asks the person on the phone if they have ever felt that, no matter what they eat, they always feel tired and sluggish. Root Beer Guy's boss suddenly snaps his fingers at him and tells him to get back to work. Root Beer Guy continues calling people. When the day is over, he walks outside and is greeted by two coworkers standing by the door. He walks to the subway, gets on, and proceeds to read a mystery book. He then walks home.

At his house, Root Beer Guy and his wife, Cherry Cream Soda, eat dinner. He compliments the food and asks her what it is. She replies, "Candy." Then the scene switches to Root Beer Guy and his wife in bed. He is reading a book, but he stops when his wife asks him to turn off the light. He cannot sleep, so he gets up and pulls out a typewriter from under the bed. He goes to the kitchen to continue writing his novel. While doing so, his cat scratches at the door and he lets it out. Suddenly, he hears a scream from outside, so he investigates. He peeks through the bushes and sees Finn and Jake putting Princess Bubblegum in a case. Jake shape-shifts into a truck and Finn places the Princess in the bed. Root Beer Guy notices that something falls out of Finn's pocket before they take off. Shocked, Root Beer Guy goes back inside and wakes his wife to tell her what happened. She replies that it is an interesting dream and goes back to sleep, leaving Root Beer Guy wondering whether it really happened.

The next morning, the cat scratches at Root Beer Guy's door from the outside. Root Beer Guy is asleep in the kitchen with his typewriter. His wife wakes him up. She tells him that he cannot keep falling asleep on the typewriter and that she misses him at night. He apologizes, confessing that he cannot stop thinking about what he saw last night and all these mysteries. She accuses him of caring more about his novels than her and explains that she needs more attention. After his wife leaves the house, Root Beer Guy goes outside to re-examine the crime scene. There he finds a CCTV camera on a pole and a matchbook with a picture of Lake Butterscotch on the cover.

The scene changes to Root Beer Guy's job, where his boss is asking him how many products he had sold. He answers none, and his boss tells him sarcastically that at least he can count to zero. Finn and Jake suddenly appear outside the window, seemingly looking in at Root Beer Guy. This surprises Root Beer Guy, who goes outside and asks them angrily what they were doing last night with Princess Bubblegum. They reply suspiciously that they were home last night doing "that thing." Root Beer Guy insists he saw them last night. Finn threateningly tells him to pretend that he did not see anything, then walks away with Jake in an odd manner. This makes Root Beer Guy more suspicious. He follows them and stops to call the Banana Guard in an attempt to have the duo arrested. Jake goes into the corner saying the princess is there and shape-shifts part of himself to imitate the princess. The Banana Guards are fooled and greet the impostor. This angers Root Beer Guy, and he walks away. He then spots the surveillance room, where all the Banana Guards' video security tapes are stored, and kicks open the door, alerting a guard. He searches the room and finds the incriminating tape. The guard returns, thinking someone might have entered the room without authorization. Root Beer Guy narrowly escapes detection by hiding in the stacks of videotapes.

Later that night, Root Beer Guy goes home, where he finds his wife dressed up like a French maid. To her frustration he ignores it and tells his wife that he found the evidence of Finn and Jake's crime. She replies that they would never do that. He then plays the tape of the scene while his wife calls Finn and Jake. Satisfied, he tells his wife that he will go out and present the evidence to the Banana Guard. He opens the door only to find Finn and Jake waiting for him. They immediately take the tape. His wife explains that she called them to stop what he was doing and that this was all for their own good.

Root Beer Guy follows Finn and Jake to a store, Pudding's Hardware. There he asks Mr. Pudding what they bought and where they are going. After rattling off a suspicious list of items, he replies they were headed to Lake Butterscotch. Then Root Beer Guy borrows Mr. Pudding's pickup truck and heads over to the lake. There, he makes out the silhouette of Finn and Jake in a boat through the fog. He calls the Banana Guards, pretending to be a maniac who kidnapped the princess to get them to head over the lake to arrest him, which does not provoke any real interest on their part. Annoyed, Root Beer Guy then tells him he was there boating after 8 p.m., (against the lake's posted rules) which finally provokes action from them. Before they get there, Finn and Jake dump what Root Beer Guy suspects to be the princess in the lake. The Banana Guards arrest Root Beer Guy and later get Finn and Jake by using a rope to pull their boat back to shore. Finn and Jake congratulate the Banana Guards for catching them, calling out to Princess Bubblegum who appears out of the lake, throwing confetti and cheering for the guards.

The princess also congratulates the guards for solving the case of her kidnapping, but much to her surprise, the guards have absolutely no clue to what she is talking about. Confused, Princess Bubblegum asks who actually solved the case. The guards say it was Root Beer Guy, who is seen handcuffed. Furious, the princess asks why he is in handcuffs and the guards have mixed answers regarding Root Beer Guy breaking the law of being on the lake after 8:00 p.m., much to the princess's chagrin.

A day or two has passed, and Root Beer Guy is seen talking with his wife about the previous night, commenting that it has been quite a long time since he and Cherry Cream Soda have danced. As he is in a new uniform and heading out the door with her, she states that she is proud that he has become the Captain of the Banana Guards. The two walk away from their house holding hands as the mystery novel and the typewriter are seen in the trash bin.

While Root Beer Guy is typing at his typewriter, the following excerpt is visible. It seems to be a noir detective story about a trouble-loving person named Joe Milkshake: 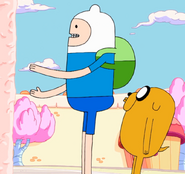 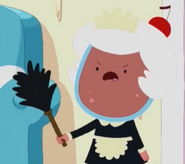 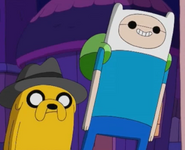