Jesse Moynihan & Ako Castuera
"Reign of Gunters" is the twenty-fourth episode in the fourth season of Adventure Time. It is the one hundred and second episode overall.

Gunter attempts to take over all Ooo while she sends a distracted Ice King away.

The Ice King is in his room looking for his magic wishing eye. Gunther comes in and Ice king follows her to a hair brush. Ice King says the brush is for princesses only, and it is shown that it has a dirty piece of Princess Bubblegum's hair stuck to it, which Ice King smells. He then leaves to go to Wizard Market to get a new witching eye, and Gunter is left alone crying in the corner. She then heads to the Ice King's recliner, where it is revealed that Gunter keeps her kitten offspring, and the Ice King's demonic witching eye.

The scene changes to the Ice King flying to Wizard Market. It is hidden by a fake cliff, and when the Ice King says 'wizards rule', it opens for him. Inside the City, Ice King comes to a stop in front of a store. He reads the sign above that apparently has the wizard symbol for "magical items". He asks Huntress Wizard just to be sure and she replies, "duh.." 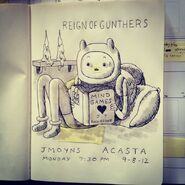 Art by Jesse Moynihan.
Add a photo to this gallery

You trying to get killed, Ice King?

Wizards only, fools, keep it tight.

Retrieved from "https://adventuretime.fandom.com/wiki/Reign_of_Gunters?oldid=344416"
Community content is available under CC-BY-SA unless otherwise noted.