Ako Castuera
Jesse Moynihan
"Red Starved" is the thirty-eighth episode in the fifth season of Adventure Time. It's the one hundred and forty-second episode overall.

After Jake accidentally eats Marceline's red erasers when they become trapped in a cave, Finn must find a red object before his friend has his blood drained by Marceline.

The episode starts off inside an underground sand city. Jake starts groaning and complains about feeling sick after he ate the candy in Finn's bag, but Finn claims that he did not bring any candy. Jake says that that must be the reason why it tasted different. He then asks what is going on with the spoon and Marceline so Finn looks at the spoon on top of a column where an invisible Marceline takes the spoon and taps it on a sand soldier that collapses. Marceline hands the spoon to Finn when Jake suddenly belches, echoing through the cave and causing some structures to crumble. Jake says that he feels better now and is hungry again, so he wants to go home. Finn states that they must give the spoon to Princess Bubblegum first.

Marceline begins to ask why Princess Bubblegum wants the spoon. Jake says that it is sometimes better not to know and Marceline agrees. Jake suddenly stepped in quicksand and starts sinking. Jake tries to get out several times but he keeps falling back in. Finn tells him to quit messing around, so Jake then grabs the support beam on the platform Finn and Marceline are standing on, causing it to collapse. Wondering if the entire place is made of quicksand, Jake asks for help in pulling himself out of the quicksand. Finn and Marceline grab Jake and pull and end up tickling him in the process, so Jake suggests that he should try something else and turns his body into a large corkscrew. As Jake starts drilling his body out, the city now begins to rumble and a large pillar of sand collapses causing an avalanche of sand. Jake manages to free himself from the quicksand and Marceline grabs them both before the sand avalanche hits them.

Marceline says that Jake demolished half the city with Finn adding that he sealed their only exit. Jake apologizes and says that he will dig their way out of there, but Finn and Marceline state that he will bury them alive/undead. Finn pulls out his Holo-pendant and calls PB for help, but their signal gets cut. Marceline asks if they have any more bright ideas and Jake states "snacks," which he simply suggests because he is hungry. Marceline says that she is hungry too and tells Finn to bust out the snacks. As Jake grabs a cookie to eat, Marceline asks where her red erasers are and Jake suddenly realizes that what he ate a while ago were the erasers. Marceline becomes enraged, but Finn tries to calm her down and that he will search for something red in the cave while they save their energy. While Finn tells Jake to be cool as he leaves, Jake asks Marceline how hungry she is. Marceline replies with a hiss and a frightened Jake apologizes, quickly saying "Please don't eat my blood!" Marceline tells Jake that she does not want to hurt him, but lets him know that things go crazy when she is hungry where she goes into a "feral mode." Jake simply whimpers in response. Marceline suggests that they tie her up, not that it would stop her from draining his blood, but so that he would not be scared.

Finn is walking beside some streams of lava saying that even Marceline's face would melt off if she tried to eat the lava. The scene cuts back to Marceline and Jake. Marceline is all tied up and getting worse and tells Jake to get her a bucket of lava. Jake denies her request and whispers, "Why did you leave me here, dude?"

Finn finds a blocked entrance with some red light shining behind it. He kicks the sand wall and it collapses, discovering that the people in the cave are not actually sand people, but people turned into sand by the red light. He passes by the corpse aiming the light and crawls into a hole. Switching back to Marceline and Jake, she starts to threaten Jake saying that she can smell his insides. Jake screams and the scene goes back to Finn.

Finn is still crawling in the hole. At the end of the hole, he finds a turtle-like creature shining the red light into a gem. The creature asks if that is Paris, but Finn tells him that Paris has been dead "for like 500 years." Finn asks what they were doing and the creature explains that they planned to reanimate the sand people to conquer its homeland at the center of the Earth. Finn then asks if he can have the ruby, but the creature says that it is an emerald. Insisting that it is a ruby, Finn says that he would like to take it. The creature gives it to him and walks into the shadows as Finn attempts to move the gem.

Jake has now covered Marceline up to her neck with sand as Marceline says that she cannot control herself much longer, apologizing before laughing evilly. Jake quickly tries to think of a plan, but is too hungry to do so. He then realizes that he could cook and eat Marceline before she eats him. After surrounding Marceline with lava, Jake spots Finn arriving with the gem. Jake says that it is not a ruby and that it is an emerald, but Finn denies it. Jake tells Finn that he may be a little colorblind and the gem is shown to indeed be an emerald. Finn suddenly notices that Marceline is gone, making Jake panic and attempt to run with Finn, but Marceline is overhead ready to attack. Suddenly, a giant worm bursts through the ceiling and Princess Bubblegum arrives, controlling the worm inside its mouth through tubes attached to her head. Jake tries to warn her that Marceline has gone rabid, but Marceline grabs PB and bites and sucks all of her pink bubblegummy blood. Marceline returns to normal and thanks PB, saying that should hold her over till they get home. Finn asks if PB is okay, who then asks for the Spoon of Prosperity they found earlier. Placing it on her nose, she turns back to normal. The worm then leaps upward as the city is filled with lava, and the episode ends. 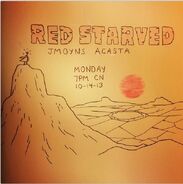 The promotional artwork for "Red Starved"