The Red Star Ball was a ball seen being played with by the Soul Sucked Fuzzy Friend among other Fuzzy Friends in the episode, "It Came from the Nightosphere."

It appears to be a red ball with a golden star on it. 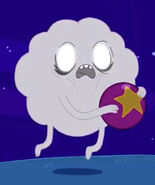