"Reboot" is the thirteenth episode in the eighth season of Adventure Time. It's the two hundred and thirty-eighth episode overall.[3]

Finn and Jake take on one of the fiercest enemies they've faced when a powerful ally goes rogue.[4]

In the candy forest, the eel monster from the previous episode emerges from the ground with Finn riding it, and with Jake using a web gun in an attempt to bring it down. Jake tries to shoot the large monster but continuously misses, instead hitting several birds and trees. The eel monster lands on the ground and begins to slither away. Jake tries to shoot it again, but ends up hitting several more trees and birds. Susan (fed up with this) charges at the eel monster despite Finn warning her not to as the eel emits potentially dangerous amounts of electricity; which Finn is immune to (See "Flute Spell"). Susan jumps onto the eel and is launched backwards from the electricity.

But then Jake grows to gigantic size and smashes the eel monster with a giant tree which defeats the monster, to which the eel says "Yabba dabba dabba dabba." Finn climbs out of the eel as Finn goes to see if Susan is alright, Jake gets a Message from Princess Bubblegum who asks what was the explosion about and demands to know what's going on. Finn then approaches Susan, who turns her head revealing that the implant is being activated, as Princess Bubblegum is sending Banana guards and Nurse Poundcake to help. Finn and Jake are confused about the implant on Susan's head which is beginning to surge with electricity, and Finn decides to touch it too see what it does, but this gives Finn a small electrical shock as the implant becomes fully activated.

Then Susan wakes up with white eyes, and gets up, and reveals in a more fluent voice that she is a Strong Seeker. She then turns to a surprised Finn and as a target gets up and shoots Finn with the web gun used by Jake. Jake, confused by this, is grabbed by Susan and thrown miles away, and right when Susan was about to capture Finn, Finn's grass arm begins to act up, but he stops it as Susan's their friend. Then the banana guards, Nurse Poundcake and Princess Bubblegum show up and is confused of what is going on but before Finn could say he's grabbed by Susan and is taken into the candy forest, as PB tells the banana guards to get Finn.

As Finn is being taken to the forest, he cries out for help, and then the Banana Guards show up and ask for things to be easy, but then Poundcake begins to yell at Susan for what she's done and who she's messing with. But as the Banana guards were trying to calm her done, Susan attacks them and begins to beat them up, but then Susan's implant acts up again and sees that Finn has been taken back to the Candy Kingdom.

Back at the Candy Kingdom, as Princess Bubblegum is undoing the net around Finn, the Gumball Guardian tells the princess that Susan is approaching. So Princess Bubblegum tells the Gumball Guardian to stop her gently but gets confused by this long enough for Susan to get into the city. But then the guardian shots lasers at her which creates a very large blinding fog. After this Finn (who is freed) looks around and sees Susan who is glowing and thanks to the energy she absorbed from the laser, Susan grows to a giant person, as the Guardian apologizes for this. Susan who is now much taller, grabs Bubblegum tries to squat her but right before so Rattleballs comes out of a chimney to fight her. As he was running Susan drops Bubblegum sits down and grabs Rattleballs sword with her toes then puts Rattleballs on her foot and pulls on his arms and legs until he shatters into countless pieces.

Then Susan grabs Finn and jumps high in the air and flies while sitting down and plans on finishing the mission. Susan then gets to the beach where Finn asks what's going on and after that, Susan lets go off Finn and steps on him instead to keep him still. She then begins to scan the horizon, as Finn asks what she's looking for, she then begins to find signals from there home. Then Jake from a distance forms a giant spike ball and smashes it on Susan's head, as Jake run's out of the forest as a giant spiked monster. Jake puts his foot on Susan which releases Finn as Susan begins to lift the foot up, Finn climbs into Jake forming the Jakesuit.

Jakesuit begins to attack Susan and despite her giant size, Jakesuit pins her to the ground, though what they don't know is that Susan has sent a signal to the island for transport pickup. Jakesuit then throws Susan into the water, as Finn tells Susan if she wanted him to go she would've said yes. Then Susan comes out of the water with a giant anchor and says that the project most be completed and throws the anchor which lands on Jakesuit. Finn and Jake survive though Jake is as flat as a pancake and Finn crawls out of the body, Susan begins to come to shore Finn has no choice but to use his broken Finn Sword.

Finn only hits Susan's ankle with the flat of the sword as she picks him up. Finn then hits her on the side of the head which causes her implant to fall off. This turns Susan back to her normal self, but then Finn's grass arm takes the form of multiple vines that wrap around Susan and lift her up in the air and begin to squeeze her, but before she could be finished, Finn punches his arm which releases Susan who is knocked out, and as the grass arm begins to recede into Finn's arm, it passes by the Finn Sword, but goes back to it as it has a piece of the grass sword in it. It then lifts up in the air and begins to wrap around it as Finn's arm becomes unravelled leaving Finn armless again. As the Finn Sword finishes being wrapped, Sword Finn comes back to life, but is quickly replaced by an octopus like creature.

The Finn Sword is finished being wrapped and falls to the ground where it grows a pair of arms it gets up and Finn tells it to come back. The episode ends with the grass thing walks onto the anchor and turns around revealing to be some kind of grass person, and with his own grass sword. 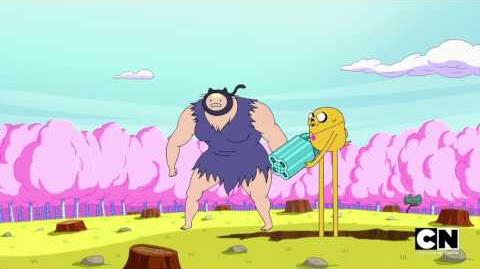 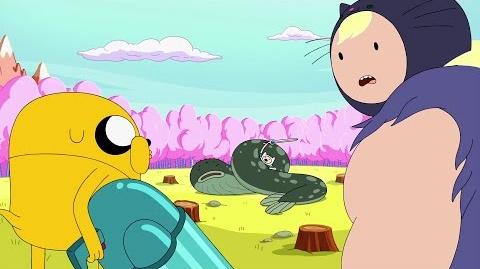