They were nominated for both an Annie Award and an Emmy Award for her work as a writer and storyboard artist, partnered with Adam Muto in Adventure Time seasons two and three. She was also nominated for an Annie Award for her storyboard work with Cole Sanchez in seasons four and five. Rebecca has the distinction of being in the 2012 Forbes List of "30 Under 30 in Hollywood."

Departure from the show and subsequent involvement

They are the creator of Steven Universe, a television show Cartoon Network greenlit for production around 2012-2013, making them the first nonbinary cartoon creator in the network's history.[2] Rebecca left Adventure Time to work on her new show, with their last episode being "Be More."

At NYCC 2015, during the Adventure Time panel, it was announced that Rebecca Sugar would return to Adventure Time for the "Stakes" miniseries, writing the song "Everything Stays" and playing the role of Marceline's mom. 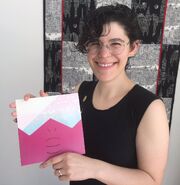 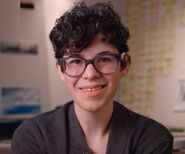 Rebecca Sugar at the mic