John DiMaggio (in "Wizard")
Clancy Brown (in "Dungeon")
Reaper makes an appearance in "Wizard." In the episode, he offers Finn and Jake a chance to earn magical powers for free, but the evil catch is that they must stop a meteor from hitting the academy. Finn haggled with the Reaper, saying he wanted more than just free Wizard Powers, so Reaper snapped off his arm and made it into a keychain. At the end of the episode, he offers them a Demon heart. He may have been one of Bufo's minions. He is a lich, which is an undead creature usually associated with magic. He also appears in "Dungeon," where he challenges Jake to a duel with the classic "Choose Your Weapon" start.

First appearance in "Wizard": "You want some magic powers...?" 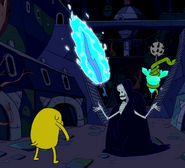