"Rattleballs" is the forty-sixth episode in the fifth season of Adventure Time. It's the one hundred and fiftieth episode overall.

Finn wants to be trained in sword fighting by an old gumball robot named Rattleballs, who lives in the junkyard.

Princess Bubblegum is startled when she finds Finn in her kitchen at five in the morning. Finn explains that he has rededicated his life to serving and protecting Princess Bubblegum now that his relationship with Flame Princess has ended. Bubblegum mentions that she is out of milk and Finn runs off to get it. Three weeks later, he returns with mink milk and is visibly exhausted. Upon seeing this, Princess Bubblegum orders Finn to take some time off and rest.

Finn goes to a junkyard singing a song while cutting objects with his grass sword. While playing around, Finn is almost crushed by a falling car, but is saved by a mysterious hooded swordsman. They have a duel, but Finn is outmatched and easily defeated. After the fight, Finn's opponent reveals himself to be an old gum ball robot named Rattleballs. The robot praises Finn's warrior spirit, but criticizes his swordsmanship before walking away. Finn tries to convince Rattleballs to train him and is successful after helping Rattleballs remove a gumball that had been lodged inside of his body.

When the training is over, Rattleballs shows Finn his secret technique and tells him he will be able to perfect his swordsmanship after ten more years of rigorous training and becoming a robot. Rattleballs then tells Finn about his past. He was once part of an elite robot police force created by Princess Bubblegum to replace the incompetent Banana Guards. Although he and the other gumball robots excelled at protecting the Candy Kingdom, the Princess was disturbed by their ruthlessness and love of violence.

She soon ordered the robots to gather into a factory where they were to be destroyed without their knowledge. Rattleballs, through sheer willpower, overcame his programming and escaped to the junkyard and stayed there ever since. He asks Finn not to tell the Princess because she would have him destroyed. However, Finn feels bound to his word to serve the Princess and immediately tells her everything. She, Finn, and the Banana Guards go to the junkyard and surround Rattleballs. Finn tells the robot to surrender as he believes Bubblegum will hear him out, but the Princess orders the guards to destroy him. Rattleballs easily defeats them but does not kill them, as he claims he has found peace. He then surrenders to the Princess, saying that he still serves her "one hundred percent" even if it means his destruction.

Later, Princess Bubblegum gives the Banana Guards a metal cube as proof that Rattleballs had been crushed and killed. However, it is revealed that the cube was fake and the Princess had spared the robot in secret. She sends him out into the kingdom so he can protect it from the shadows. Rattleballs accepts this duty, stating that was "marginally better than hiding in a dump," before being knighted and jumping away with a smile. 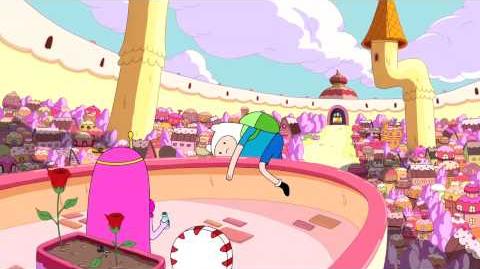