James Urbaniak
The Rat King is character introduced in "Little Brother." He is, of course, the king of the rats. Kent went on a quest to defeat him by breaking off his teeth to protect Finn and Jake's tree house, and he apparently succeeded.

The Rat King is a white rat with a crown. The crown has a single blue gem in it. His tail is pink as well as his eyes, and he possesses long, glowing white teeth that are seen releasing a poisonous green smoke. In the final battle between Kent and the Rat King, the Rat King wears a cloak and has blue mist coming out of his mouth. When he was seen earlier in the episode, he appeared to be a normal rat but with a crown. Later in the episode, he could talk, and his body under the cloak was made up of a horde of rats. His teeth are hard enough to require a special sword to break, and his constant gnawing at its roots has prevented the willow tree from blooming.

The Rat King gnawing at the Tree Fort's roots

The Rat King runs away as the Snail is seen. 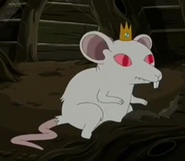