Randy is a Candy Person that appears in the episode "Davey" helping Davey (Finn) build a cabin outside of the Tree Fort. He seems to have lived with him in the cabin as well. Jake attempted to rob Randy in front of Finn, in hopes Finn would stop being Davey and finally become the hero he truly is, but instead, Finn (Davey) calls the police, leaving Jake being dragged away by the police.

Randy is a white circular Candy Person with brown hair and a beard. He also has yellow, blue, and pink sprinkles on his stomach. 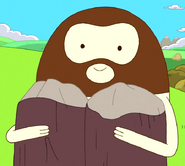