The Rainicorn-Dog Wars refers to a war (or series of wars) between dogs and rainicorns. In "Her Parents," Jake explains that it was a conflict over territory in the Crystal Dimension that lasted for thousands of years. It occurred recently enough for Bob Rainicorn to have fought in it.

Based on Jake's drawing of the war and the photo of Bob Rainicorn with a dog who saved his life, it seems that flying saucers were a part of it and the dogs used laser guns.

It is unknown which side, if any, was the ultimate victor of the war, though Bob and Ethel Rainicorn currently reside in the Crystal Dimension. 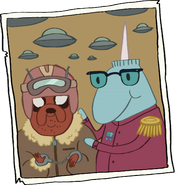 Jake's drawing of the war
Add a photo to this gallery
Retrieved from "https://adventuretime.fandom.com/wiki/Rainicorn-Dog_Wars?oldid=356676"
Community content is available under CC-BY-SA unless otherwise noted.