Raggedy Princess makes her first appearance in "Prisoners of Love," in which she is kidnapped by Ice King. She also appears briefly at the meeting of Ooo royalty in "The Duke," "Mortal Recoil," and in "Loyalty to the King." Her most important role to date is in "Apple Thief," where she is seen lying down in a ditch. She tends to giggle while speaking to Finn, implying that she has a crush on him like several other princesses. In "Breezy," she was at Crab Princess's party, but she can't reach the juice on her lap because she doesn't have any arms (Though she has arms in "Princess Day"). It is revealed in "Princess Day" that she is considered a registered princess. Raggedy Princess is the apparent princess of the Ooo Junkyard. She also owed Peanut Princess some socks and a pair of jorts in "Princess Day."

Raggedy Princess appears to be made of worn-out material like a rag doll, and her body looks similar to a torn sock. Her mouth seems to be stitched together, but the stitches are loose enough for her to open it. Her left eye is a light green button, and her right eye is a hole. On the right side of her dress, there is a light brown patch sewn on. She has no arms. She wears a piece of glass on her head in place of a crown. She also has brown hair that may be made of yarn or other material, possibly even a wig. One of her legs (possibly leggings or stockings) is pale blue and the other leg is striped with red and light grey, resembling socks of some sort. In the episode "Loyalty to the King," she along with the other princesses beat up the Ice King. Since she doesn't have arms, she kicks him.

Raggedy Princess seems to be fairly quiet and shy. It is heavily implied that she has a crush on Finn, as she blushed both times she's been in his presence. In "Sky Witch," Princess Bubblegum states that Raggedy Princess has zero self-respect.

She has the ability to sew ripped things like Finn's backpack (take back all pieces in the preview episode on the crime scene "the king lich's lair") with her feet; Raggedy Princess is one of the princesses that helped to make him a new one after the original was ruined. It is not clear which other princesses helped, however. In "Sky Witch," Princess Bubblegum estimates that Raggedy Princess could sew Marceline a new teddy bear in three seconds flat.

Additionally, she appears to be able to store things inside her body as seen in "Princess Day." When Peanut Princess demands that she pay her, Raggedy Princess begins flinging socks with her foot out of her empty eye socket. 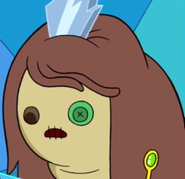 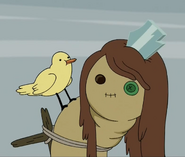 Add a photo to this gallery
Retrieved from "https://adventuretime.fandom.com/wiki/Raggedy_Princess?oldid=798269"
Community content is available under CC-BY-SA unless otherwise noted.