Ava Acres (Jamaica)
Max Charles (Toughy/Blombo)
The Pup Gang is a trio of notorious Candy People who are well known in the Candy Kingdom. What they did to become notorious is unknown, but Jake says that they once threw a basketball at his head, which can be seen on the promo art for "You Made Me." The three are named Jamaica, Toughy, and Blombo. It is also revealed in the same episode that they have parents who neglected them ever since they were young, and they still crave for the love they never got.

The Pup Gang offer to move in with the Earl of Lemongrab in "You Made Me" in exchange for amnesty for their past crimes and the "Big Cash Money Wad" for their delinquent mothers, but were sent to the reconditioning chamber because Lemongrab was annoyed at Blombo for not heeding his instructions to take off his headphones. They were later shown returning to the Candy Kingdom with Finn, Jake, and Princess Bubblegum after Lemongrab and Lemongrab 2 pardoned all prisoners. They joined the party in the episode "Breezy," applauding Finn's dance.

In "Scamps," they are shown to be back to their delinquent ways, and to have a rivalry with the Marshmallow Kids, who scare them off by lighting themselves on fire. Jamaica is briefly seen in "Flute Spell" stealing an apple at the farmers' market, again as part of the crowd watching the Battle of the Bands in "The Music Hole," and as part of the onlookers in "Daddy-Daughter Card Wars." 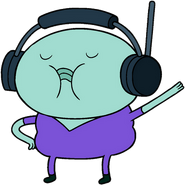