"Puncha yo Buns" is one of the most often sung songs in the series.

This song was first sung by baby Finn in "Memory of a Memory." While in Finn's mind, Marceline witnesses a memory of baby Finn singing this song in the bathroom of Finn's childhood home. Finn is not visibly embarrassed about Marceline seeing him singing and dancing as a half-naked baby, but closes the bathroom door regardless.

The Baby Finn song made a cameo in "Goliad" while Goliad was reading Finn's mind. It was used as a distraction to keep Finn from thinking about the plan to destroy Goliad. Finn creates an army of his baby self, but Goliad melts them all in order to recreate Princess Bubblegum to find out about her plot.

It is sung by Jake in Finn's body in "Jake Suit," to humiliate Finn for a bet. Jake tries to embarrass Finn in Flame Princess's house in front of her relatives by stripping Finn semi-nude and stuffing a tinfoil sheet into his underwear. Later on, Flame Princess finds out about Jake and the bet and wishes Finn luck. 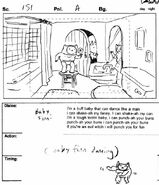