Project Exonaut is a game on CartoonNetwork.com. Some of the exosuits in the game are based on Adventure Time characters.

If you chose the Atlas Brigade, you can buy the Jake exosuit at level 10 and the Princess Bubblegum exosuit at level 30. If you chose the Banzai Squadron you could get the Finn and Marceline exosuits at level 10 and the Ice King exosuit at level 30. On October 13, 2011, the Grim and Marceline exosuits became unlocked for every player for the Halloween Slam event and in the Holiday Bash in November and December, all Adventure Time characters exosuit's were unlocked. Also Finn, Marceline, Princess Bubblegum and Jake are now in the training zone at the start of the game. BMO and Lumpy Space Princess were added in April 2012. 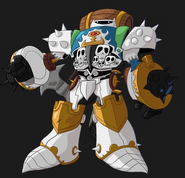 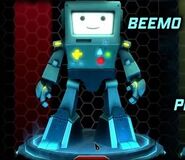 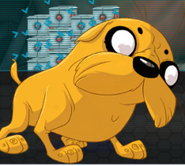