"Box Prince"
Pro Football 1861 is a game that Jake plays on BMO in the episode "Business Time." It reappears in "Davey" when Randy is playing it on a TV screen, and Jake is again seen playing it in "Box Prince." It involves two Abraham Lincolns, one throwing a football at the other, who then kicks it. The game's title is never mentioned in the show, but was revealed on the Beemo app, which includes a real, playable version of the game.

The game as it appears on the real-life app 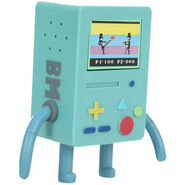