Finn and Jake must free themselves and seven princesses from the Ice King.

This episode starts off with Finn and Jake sledding in the Ice Kingdom on an office chair. Their sled decapitates a Snow Golem, who makes a cat head as a replacement. After the sled ends up getting broken, Finn resorts to riding on Jake's belly. They sled into a group of penguins and fall down an ice chute and land in front of the Ice King as he is preparing to bury something in a shoebox. The Ice King is angered by their trespassing on his domain. He summons a band of Snow Monsters to beat up Finn and Jake, but the monsters are quickly subdued. As the duo celebrate their victory, the Ice King freezes them into a block of ice and then wheels them away to his castle, all the while talking to himself about the difficulty of moving blocks of ice. Once he is at the door he stops to eat a piece of yogurt from his trail mix. The Ice King then hurls them into a cell along with Lumpy Space Princess, Slime Princess, Wildberry Princess, Hot Dog Princess, Ghost Princess, Emerald Princess and Raggedy Princess.

The princesses say that Ice King has kept them for weeks and questioned them about their quirks and favorite sports. He says he plans to marry one, but captures six of them to make sure that he chooses the right princess. Finn and Jake try to figure out ways to get out of the cell, but Finn's flute breaks when he tries to spear the Ice King and he freezes Jake when he tries to use his stretchy powers to make a Key Hand, causing Finn to flip out. The princesses also say that they are not having fun in the cell, since Ice King does not know how to entertain them. He thought that reading them "Baby Whoozlefut & the Wuttlebugs" would be fun, but none of the princesses thought the book was fun (Lumpy Space Princess states that it was lame).

Ice King then forces Wildberry Princess and the other princesses to play musical instruments. Finn soon devises a plan while Ice King drums and makes him leave the room so he can tell Jake and the princesses his plan. They pretend to have fun and trick Ice King into coming into the cell where Finn will beat him up and Jake and the princesses can escape. When Finn fights Ice King, Ice King gets knocked out and dreams about why people do not like him. In the dream, Cosmic Owl tells Ice King that he is a sociopath. Ice King wakes up after being tickled by penguins and sees that Finn, Jake, and the princesses have already escaped. Meanwhile, they celebrate their victory and Slime Princess tells Finn that she would want to marry him. Finn asks Jake to help him out, only for Jake to lie that Finn pees his pants constantly, making Finn mad and the princesses disgusted.

This episode was censored in some parts of Asia and Australasia. 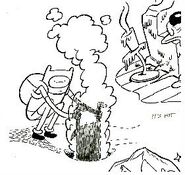 Ice King beaten up by Finn

Ice king with the Cosmic owl

Ice King with his penguin tattoo

Finn as a sled for tiny Jake 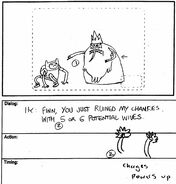