"Princess Potluck" is the eighteenth episode in the fifth season of Adventure Time. It's the one hundred and twenty-second episode overall.

Ice King does everything possible to ruin a princess potluck he believes he didn't get invited to, using a variety of tactics in an attempt to do so.

The episode begins as Finn and Jake are walking towards the Princess Potluck. Finn complains that his callus on his ankle, due to his missing sock, is going to ruin his fun and the party. Jake assures him that they will have tons of fun, and that he will get compliments on his make-up. Finn says he looks like a target, after which an arrow whizzes behind Jake's head from somewhere off-screen. The two arrive and Finn gets excited about a bounce house, which turns out to be Bounce House Princess. She invites him in, but he declines. After greeting Princess Princess Princess, Embryo Princess, and Skeleton Princess, whom Finn does not seem to know, they approach Princess Bubblegum. She welcomes them and asks Finn about his leg, who explains that he cannot find his sock and got the shoe rash. She tells him to sit down and relax, and mentions that she is hosting a raffle, the winner of which will receive a secret prize, kept in a cooler. Finn then gives her a soda, confessing that it is warm and that he shook it all up. Princess Bubblegum then buries it in snow, which happens to part of the Ice Kingdom.

The scene shifts to Ice King, who is playing with mini hair teepees on his belly. He then senses that something has been put in his ice. He grabs Gunter and goes to his telescope, through which he sees that his "off-again on-again GF" Princess Bubblegum, his "BF's" Finn and Jake, and "all the fine princesses that want to date" him are throwing a party without him. He gets mad and goes off to create a plan to ruin the potluck.

Ice King flies to a forest, where he captures a variety of rabbits and cats. He returns to the Ice Kingdom and begins to tie lemons onto the cats. Then he checks on his rabbits, who are eating lasagna, and tells Gunter to bake more. Ice King then flies out the window and goes behind a bush near the potluck. He opens one of the bags and sends out the cats. Finn notices them and tells Jake to check it out. Jake proclaims he does not like cats, but does like fresh lemon in his ice tea. Princess Bubblegum notes that LSP does not have to make a lemon run after all, to which Lumpy Space Princess replies, "Yes!"

Ice King, seeing the cats did not work, plans to use the rabbits he fed lasagna to; however, when he opens the bag, he is so disgusted by its contents that he leaves it there. He then plans to dress Gunter up as a princess in order to send her undercover to throw fruit punch on everyone and ruin the party. Ice King mentions how "hot" she looks and begins fantasizing about marrying her, prompting Gunter to pull out a taser in self defense. He then throws and blows Gunter out the window to the potluck below. She sees Jake, grabs a cup of punch and prepares to throw it on him; however, Jake notices her and announces her arrival, after which another arrow narrowly misses him. Slime Princess invites Gunter to party with them, which she accepts. She drinks the punch and begins to dance when the princesses cheer her on. Ice King is shocked, falling to the floor and crying dramatically.

The scene switches to Finn, who asks Gunther for one of her socks. She electrocutes him to make him back off, and continues dancing. Ice King wanders around and checks on what Gunther is doing, seeing that she is still dancing. Ice King mutters that there should be a law against this, suddenly realizing that there actually is one. He calls the Banana Guards to "tattle," saying that the party next door is disturbing the peace. The Banana Guards say they hate him and hang up. Ice King calls again, this time in the guise of an elderly lady. The Banana Guards still think it is Ice King, so he tells them to hold on while he gets his "husband." His voice switches to a thick manly voice, stating they need to shut the party down immediately. His voice continues switching back between the old lady, her husband, a pizza delivery boy, and "George." The Banana Guards cut him off, saying they will take care of it. When they arrive, however, they begin to party, disappointing Ice King.

His next idea is to create another party in order to make them jealous. He creates some snowmen and tells Gunthalina to go serve food to them, who shoves the trays into their stomachs. His radio begins playing another song, which Ice King really likes. He starts dancing with Roger, but the princesses do not seem to notice him. Ice King wishes he could magically destroy their party, suddenly realizing that he can, as he is a wizard. He begins to attack the potluck as he flies into the sky and drops a giant ice lightning bolt near Finn and then rains hail on everyone. Everyone takes refuge in Bouncy House Princess except for Finn, at whom Ice King shoots more giant ice bolts. Finn then runs and falls on the ground, nearly getting hit. Finn takes off one of his shoes, propels himself off of Bounce House Princess to Ice King and puts his shoe on his nose, causing him to fall. When Finn questions him, Ice King states that he did this because he did not get invited to the potluck. Princess Bubblegum points out that she did, in fact, send him an invitation in the mail. Ice King then says he always waits until his mail piles up and falls over, shreds it and made it into crafts. He then asks if he can party with them, to which Finn agrees on the condition that he stop acting "nanners."

The party resumes with Ice King, who is now happy, bouncing with Finn and Jake in Bounce House Princess while Finn makes another shoe for his feet. Princess Bubblegum announces that it is time for the raffle, and that the winner is Finn, who wins a Sea Lard. Jake is then suddenly hit in the head with an arrow, and everyone turns to see the enraged Squirrel. His mouth foams while he screams, "YOU SON OF A BLEEP-BLOB! JAAAAAAAKE!" Jake does not recognize him, saying, "Heeey, yooou…" 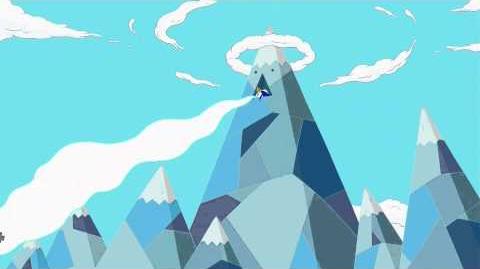 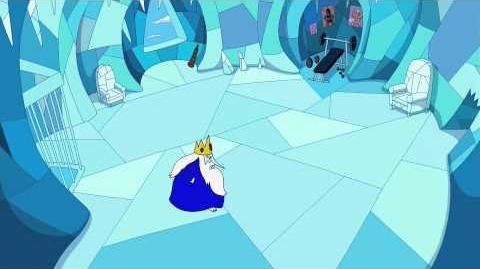 Welcome to the Potluck, guys! 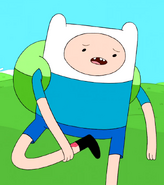 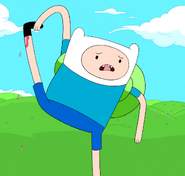 Does it look bad?

Gunter cooking lasagna with the Snail