The Princess Plant is a type of plant seen in the episode "Death in Bloom." When Princess Bubblegum assigns Finn and Jake to take care of it, they accidentally kill it by feeding it food and carbonated drinks instead of plain water, pulling it out from its pot, and accidentally burning it. They visit the Land of the Dead to reclaim its soul from Death. When Princess Bubblegum eats one of its flowers, it changes her hairstyle from straight and knee-length to a short, wavy bob.

The Princess Plant appears to be a regular plant with flowers similar to a lily, having white petals, an orange stigma, and a green stem, and it is in a small green pot with a yellow zigzag and handles. It resembles a white lily, except it has swirly petals.

Princess Bubblegum after eating the flower of the Princess Plant 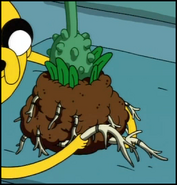 The Princess Plant's roots are exposed.

Death returns the soul of the Princess Plant.

Add a photo to this gallery
Retrieved from "https://adventuretime.fandom.com/wiki/Princess_Plant?oldid=811488"
Community content is available under CC-BY-SA unless otherwise noted.