"Princess Day" is the fourteenth episode in the sixth season of Adventure Time. It is the one hundred and seventieth episode overall.

The episode opens up with Princesses at the Breakfast Kingdom celebrating Princess Day with Breakfast Princess being the host. She first welcomes the princesses then moves on to the princesses trading system, and how they are not getting what they want. All the princesses are arguing until Lumpy Space Princess shouts making the room quiet. LSP explains she's bored and that she doesn't want to talk about dumb stuff. Breakfast Princess then disses LSP about her home, leading to her to reveal that she wasn't invited and she is crashing. Breakfast Princess sends guards to make her leave, but LSP gobbles up a bowl of croissants before leaving without the guards touching her. Marceline sees this and decides to follow her. She invites Princess Bubblegum to join her to ditch the party but PB refuses.

Marceline catches up with LSP and tells her that she likes her attitude. Marceline decides to prank Breakfast Princess which LSP immediately accepts. The two walk around Breakfast Kingdom and find the door to Breakfast Princess' room with a guard protecting it. LSP distracts the guard and Marceline is seen drinking the Syrup from the inside of the guard. They enter the room and LSP goes to the closet and finds her clothes. Marceline looks through her music, telling Lumpy Space Princess that it's terrible, however she decides to keep one of her albums. LSP eats Breakfast Princesses clothes and the two high-five. Outside, another guard is seen walking to Breakfast Princesses room, he slowly opens the door and Marceline turns invisible. Struggling, LSP grabs a grape fruit and cuts it open. She then squirts it on the guards eyes and the two flee. They run through the hallways and LSP cuts through the pancake walls they go through while being tailed by the guard. LSP cuts a hole in the edge of the castle, the guard takes a look and the two push him down.

The two listen to the album Marceline took from Breakfast Princess. LSP ask Marceline if they are completely bad since they did bad stuff. Marceline tells her that good guys can do bad things, so it doesn't really matter. The two reveal they are upset about taking Breakfast Princess' album and decide to mail it to her. The two unexpectedly drive off a cliff, but they both float (with Marceline supporting LSP) and the car crashes on the ground and explodes. Strudel Princess takes over as ruler of the Breakfast Kingdom and celebrates Princess Day with everyone cheering. 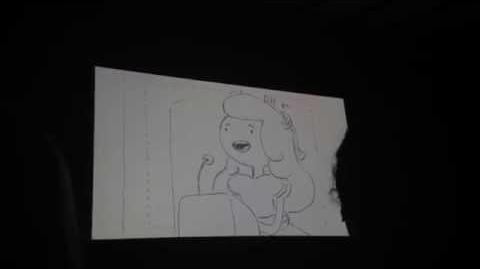 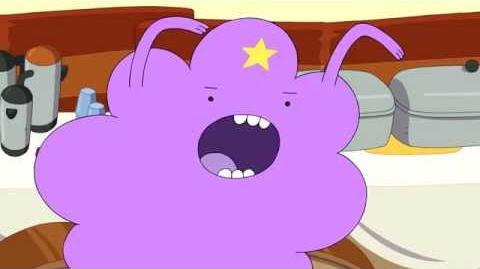 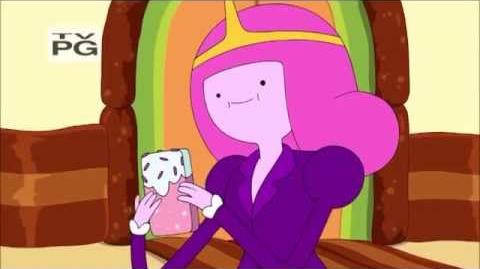 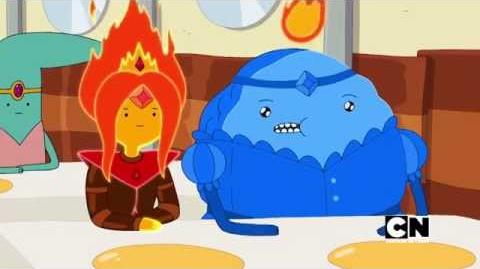 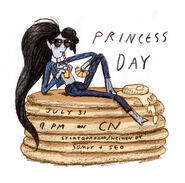 Ugh!
Add a photo to this gallery

Retrieved from "https://adventuretime.fandom.com/wiki/Princess_Day?oldid=830586"
Community content is available under CC-BY-SA unless otherwise noted.