Hynden Walch
Princess Bubblegum Bot (called P-bot) is a robot Princess Bubblegum creates in "The Suitor" for Braco to be with. P-Bot is seen being created throughout the episode. Princess Bubblegum originally intends to give P-bot a real soul from a soul stone, but she instead opts to use a "much easier to manipulate" synthetic one. P-Bot sounds exactly like her creator.

P-bot looks almost exactly like Princess Bubblegum, wearing her usual gown. The only noticeable differences are the bolts on her limbs' joints and that she is barefooted.

P-Bot, her sole purpose finding someone to be with, holds interest in Braco. She goes with him after being introduced to each other. 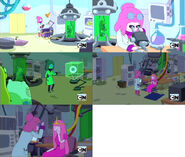 Princess Bubblegum in the process of building P-Bot