Princess Bubblegum's amulet is an amulet Princess Bubblegum wears in the episode "The Vault." She uses it to activate the Gumball Guardians. It apparently has great magical power, since the Bath Boy Gang leader says that once he has it, he'll be "the biggest cheese in creation." Shoko agrees to steal it for him in return for some "coin," but she fails to get it to him. However, she does get it to the tree that would later become the Tree Fort. At the end of the episode, Finn finds the amulet and returns it to Princess Bubblegum.

The amulet's history is expanded in the comic. It is revealed that the amulet is named Gemma the Gemstone. She came to Earth during a meteor shower 65 million years ago with her friend Carl the Gem. However, they ended up crashing into two separate volcanoes where they sank into the mantle and were turned into gems by the pressure.

A couple hundred years before the present time, Bonnibel Bubblegum retrieves both gems and turns them into friendship amulets for her and Marceline. Bonnibel discovers that Gemma can give life to machines and uses it to help her build the Gumball Guardians and Candy Kingdom. The events in "The Vault" occur after this.

In the present day, Ricardio steals Gemma and Carl in a scheme to make Princess Bubblegum love him. He uses Gemma to turn the Tree Fort into a giant robot and attack Finn and Jake. Luckily, Princess Bubblegum and Marceline show up to reprogram the house and defeat Ricardio. The two gems are finally reunited when the four decide to put both in a dungeon for future heroes.

In the far future, Gemma and Carl fell under the ownership of a young adventurer who went through the dungeon to claim them.

Like her crown, Princess Bubblegum's amulet is gold and inlaid with a blue gem. It is fairly flat, enabling it to fit into the Gumball Guardian's coin slot. 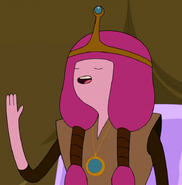