Jeremy Shada
Princess Beautiful is a princess who first appears in "To Cut a Woman's Hair." Finn digs up her grave in search of princess hair, but discovers that her tombstone reads, "Here lies Princess Beautiful. She was so beautiful, but died of baldness." For some unexplained reason, Princess Beautiful turns out to be undead. She thanks Finn for freeing her and walks away. Like most minor princesses in Ooo, it is unknown what kingdom she rules.

Princess Beautiful is a skeleton that wears a long, dark blue-grey dress with puffy sleeves, maroon detail and maroon gloves. She wears a gold, three-pronged crown with a purple gem in the top of the middle prong. She has no hair because she died of baldness.

Princess Beautiful in her coffin 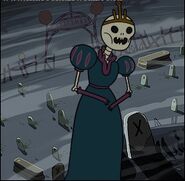 Add a photo to this gallery
Retrieved from "https://adventuretime.fandom.com/wiki/Princess_Beautiful?oldid=847284"
Community content is available under CC-BY-SA unless otherwise noted.