Tom Kenny
Princess B'Onangutan is a character who appears in the Adventure Time episode "Water Park Prank." She is first approached by Finn and Princess Bubblegum who try to help her get rid of the Daddy Sad Heads. When Finn manages to shake the Heads off her, she awards him with a universal coin and also flies him to the water park.

She resembles an orangutan with a body that vaguely resembles a skull and a crossbones shape (with the bones hanging underneath the limbs). Her body is covered with ginger hair excluding her feet and face. Her upper feet have strings tied around them and she wears a tiara with a pink pointy gem.

She is first appeared to be sad when infected with Daddy Sad Heads. However, she is seen to be grateful to Finn for curing her and give Finn a universal coin as a reward. She then flies him to a water park.

She has the ability to fly by rotating her four legs in a rapid rotor motion (like a helicopter's rotor). 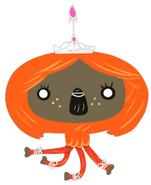 Princess B'Onangutan in the Character concepts

Princess B'Onangutan in the storyboards

Princess B'Onangutan in the storyboards