"Preboot" is the twelfth episode in the eighth season of Adventure Time. It's the two hundred and thirty-seventh episode overall.[2]

In Beautopia, Finn, Jake, and Susan Strong break down a door during high tide that reveals an arcade. Jake doesn't seem to like the place, but Finn says that they are investigating early human culture and that they'll probably find cursed artifacts. Jake starts to get a little bit excited, as it has been a while since he has received a hex.

Whilst walking through the arcade, Jake gleefuly states that someone could get cursed and that he hopes it's him. Susan comes across an old merry-go-round buried in sand and and pulls it out, which Finn believes to be the bones of a prehistoric horse that was covered in feathers and used its poles to sting people who tried to steal its honey. Jake doesn't seem to believe Finn and complains about the lack of hexes, but is unable to finish his sentence as he trips over a dinosaur plush buried in sand. Jake sits up and thinking that it is a demon, rips it out of the ground, only to discover that it's just a harmless plush. After referring to it as a "little cutie", the ground begins to shake, leading to Jake to think that the dinosaur plush is cursed. Finn thinks there is an "Ooo-quake" and with that, he and Susan take Jake with them and run outside.

As they exit, a massive animal-like robot digging its way to the surface right next to Beautopia. Finn, Jake, and Susan stand outside to see what appears to be the eye of the machine open to reveal a walkway that extends down to where they are. The fog clears and Tiffany introduces himself standing on the walkway with a bionic arm. Finn appears happy to see him alive, as he had previously thought him to be devoured by the Worm Queen. Tiffany tells the gang to come with him and that he'll explain almost everything. Finn, Jake, and Susan shrug to each other and follow Tiffany inside.

The door opens for them and a robotic voice welcomes them. The walkway continues and winds around a corner as flowers and various shapes float and grow around them. Whilst walking, Susan starts acting suspiciously, and as they approach a door ahead of them, she makes a strange computer sound which opens the door, leading Finn to asking her when she learned to speak Robot. She then walks to a large flower object and makes the same computer sound as before, causing the flower to open, revealing a strange person in a jellyfish like suit. The stranger is shown monitoring the characters, then turns around shocked when she realizes they can see her. She reveals her name: Dr. Gross and states she is both Tiffany's boss and the one who gave him the mechanical arm. The two decide to take Finn, Jake, and Susan a tour of the ship.

She takes them to a large room full of large and small hybrid animals, all of which have implants on their heads. Dr Gross begins to sing a song about evolution as the trio look around her menagerie. She shows a shark mouse hybrid that can breathe air and eat cheese, a giant chicken with wasp wings, a gigantic dragon eel hybrid that is kept in a huge tank, and many more hybrids. Dr. Gross saves her favorite hybrid for last: a bear that can tell time, which has a grandfather clock for a left arm and a clock on it's tummy. After the song, Finn asks if there are any ordinary animals, to which Dr Gross declines and jokingly states that if there were any, they'd probably die from envy. A skorp-munk tapping on glass catches Jake's attention and begins dancing in a surreptitious manner to warn Jake. As Jake starts to feel that it is trying to communicate to him, Dr. Gross hastily recommends that they move on to look at other things.

Dr. Gross leads the group to her "Examination Room," which Jake mistakenly hears as "Imagination Room". Dr. Gross then brings up seats and lollipops for her guests on account of their good behavior. Susan is reluctant to accept her lollipop; however, Finn and Jake eat theirs without hesitation. Dr. Gross then takes off her suit, revealing that she is human, albeit cybernetically enhanced. Dr. Gross goes on to explain that modifications are not only beneficial, but logical. Her intentions for bringing them become clear as she explains they are being hired, and their interrupted loyalty will earn them upgrades. After Jake tries but fails to use his stretchy powers, Finn and Jake learn that they have been paralyzed from the lollipops, and Susan shares that she cannot move either. Dr. Gross calls up her assistants to help her begin prepping the group. Dr. Gross reveals her agenda to make all humans cybernetically enhanced, implying that more humans still exist. When Dr. Gross begins prepping Susan, she notices Susan already has an implant, but the implant is one from someone else. Suddenly, as she begins to make a revelation about Susan's origins, Susan kicks her to the wall, revealing that instead of eating her paralysing lollipop, she secretly hid it under her large chin. She quickly neutralises the Doctor's assistants and busts out of the Examination Room, carrying Finn and Jake with her.

Dr. Gross signals her hybrid animals, causing them to transform into a cybernetically enhanced version of themselves and leave their cages. The animals are then ordered to fetch up the escaping trio. The scene cuts to Susan who somehow subconsciously knows the quickest path to exit the ship, much to Finn's awe. The hybrid animals catch up to Susan and try to take her down, but are easily dealt with. Unfortunately, Tiffany appears from out of nowhere and fires a net at them, finally subduing them.

Dr. Gross congratulates Tiffany and angrily states that if she can't modify the trio, then she will "use them for spare parts", transforming her arm into a multitude of deadly buzzsaws. Tiffany cries out that Jake (and to a lesser extent Finn) are "blood brothers" and to not harm them, but the Doctor ignores him and continues to move the buzzsaws ever closer to the ensnared trio, causing Tiffany to have a thought crisis. Just as the saws are about to reach the trio, her arm is knocked out of harm's way by Tiffany. Susan busts out of the net and fires a net, taking down Dr. Gross. Due to the damage to the ship from Dr. Gross's saw, the ship begins to self-destruct. Still holding onto Finn and Jake, Susan leaps out of the ship in time before it submerges and explodes.

Now outside, Finn and Jake look at the freed hybrid animals. The episode ends with Finn's worries coming true, due to the "giant electro-eel" escaping and heading to the Candy Kingdom. 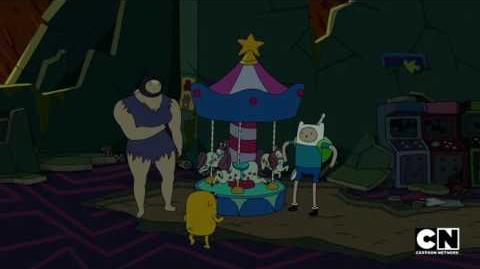 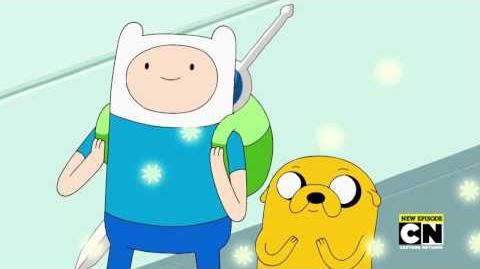