Poots and Bladders is a board game made by Ice King. It makes a brief appearance in "What Have You Done?" when Ice King comes out and introduces "Game Night" to Finn and Jake.

It is just a rectangular box with "Poots and Bladders" written on the lid. The contents are unknown, except for one rabbit-like game piece. Ice King mentioned that he carved the playing pieces out of his teeth. When Ice King first brings out the game for them to play, a red "7+" can be seen on the front of the box, indicating that the game is made for ages seven and up. 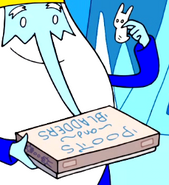 Ice King holding one of the game pieces