Polly Lou Livingston was raised in a small Jewish community in Victoria, Texas. Her father, whose parents immigrated from Russia, was the owner of a department store in Victoria while her mother, who was Polish worked as a performer. She attended Stephens College and later transferred to the University of Texas after meeting her husband, Bobby Livingston. They were married together for nearly fifty years, until the time of his death in 2000.[4]

Polly Lou Livingston made her first debut as a voice actress in Adventure Time as she was a friend of Bettie Ward, the mother of the show's creator, Pendleton Ward. She later went on to voice a character in Pendleton Ward's internet series Bravest Warriors. In addition to voice acting, Livingston was an artist and an avid fashion enthusiast.

Polly Lou Livingston died on January 24th 2021 in her house. In lieu of flowers, Livingston's family has requested that donations be made in her name to Texas Performing Arts at The University of Texas at Austin or The Elephant Sanctuary in Tennessee. A virtual memorial service was held at Temple Beth-El at 4 p.m. on Sunday, February 21. 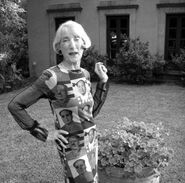