Pillowmint Butler is a character, that has only appeared in video games.

"Secrets of the nameless kingdom"

He has brown chocolate skin and is filled with a mint pastry inside. He has small white eyes. He wears a mint-colored tuxedo with a black bowtie.

Pillowmint Butler works for the Candy Kingdom. He is in charge of appointing a ruler to the Nameless kingdom. He informs Finn, that all three princesses, who built it, have disappeared. So he sends Finn and Jake to get them, so a ruler can be chosen. As can also be seen in "Finn and Jake Investigations", he knows very well, what requirements for a good princess are, when he helps Lumpy Space Princess throw a party.

Pillowmint Butler in "Secrets of the nameless kingdom" 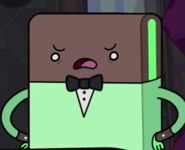 Retrieved from "https://adventuretime.fandom.com/wiki/Pillowmint_Butler?oldid=794310"
Community content is available under CC-BY-SA unless otherwise noted.