Creed Bratton
Phlannel Boxingday is a monster hunter in Ooo, who rides around on a cloud in the sky.

Phlannel asks Lemonhope what he wants to do, guiding him toward his decisions rather than making them for him. Even in their first encounter, Phlannel asks Lemonhope if he wants to hang with him in his cloud trawler to recover, not forcing the decision on him. However, Phlannel does tell Lemonhope that he will have to deal with the consequences of his decisions, as even in his ideal scenario as a monster hunter with Boxingday, Lemonhope will still be a prisoner of his own mind due to the nightmares he gets as a result of refusing to help the people of the Lemongrab Earldom when they helped him escape.

Boxingday advertises himself as a monster hunter and adventurer, collecting loot from fallen foes, and displays a good perception of how different monsters react to Lemonhope's music. He notices the scorpions run away from Lemonhope after playing Finn's flute. Boxingday encourages Lemonhope to use his musical skills to help him escape from the monster.

Despite his relationship with Lemonhope, Boxingday refuses to help Lemonhope beyond dropping him off at the earldom boundary.

When Lemonhope leaves the shipwreck in search of water, he takes note of a mysterious lone cloud above his head. After Lemonhope collapses, Phlannel Boxingday arrives on the vehicularized cloud, which he calls a cloud trawler, and hydrates him, asking him if he wants to have some help and live with him until he recovers enough to support himself.

When Lemonhope boards the trawler, Phlannel flies it into the sky, where they are attacked by the same birds that destroyed the pirate ship. Phlannel encourages Lemonhope to play his musical instruments to distract one of the birds. Initially, Lemonhope's flute agitates the bird, causing it to call its pack. Then Phlannel tells Lemonhope to play the harp, and this satisfies the bird enough so that it follows the trawler and does not notice when Phlannel directs the bird into a pillar of rock.

Upon Lemonhope's desperate request, Phlannel drives the vehicle to the fallen bird. It spouts gold and crowns, possibly taken from the pirate vessel. Phlannel Boxingday announces that he is a Monster Hunter who takes the loot from the monsters he takes down and offers Lemonhope an apprenticeship. Lemonhope calls this a "dream come true" and joins Phlannel.

Some time later, Lemonhope wakes up from a nightmare, which Phlannel says is the "third time this week." Phlannel gives Lemonhope advice, telling him that even though he is free to not deal with the Lemongrab Earldom, a debt is not easily forgotten, and Lemonhope will be a prisoner of his own mind until he repays it. 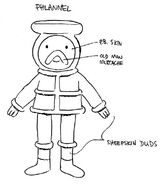 Phlannel's design from the episode storyboard. Note he is referred to as having "P.B. Skin"
Español
Community content is available under CC-BY-SA unless otherwise noted.
Advertisement