Jim Cummings
Pete Sassafras[1] is a Candy Person who first appears in "Candy Streets." Finn and Jake believe he robbed Lumpy Space Princess, so they track him down, apprehend him, and throw him in the Candy Dungeon. However, he is innocent, since it is proven that he, in fact, did not even come into contact with Lumpy Space Princess; she was just overreacting to a crush she had on the pizza guy. It is unknown whether or not he was released, though all candy prisoners were inadvertently released in "Apple Wedding." He appeared again in "Gumbaldia", having joined Gumbald's army to attack and conquer the Candy Kingdom.

He is a dark blue candy person that wears a brown trench coat and a brown hat with white, red, and green sprinkles on it. 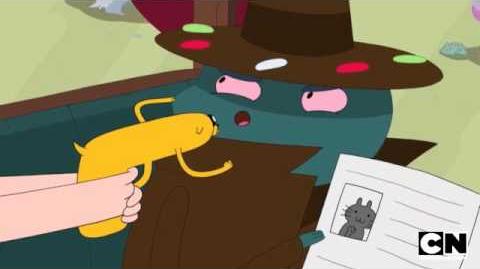