Magic User
Penny is one of the main characters in the Adventure Time comic "Ice King". She is introduced as a protagonist with good intentions, but is later revealed to be an antagonist who follows Lord Lazertron the Third and is a former member of The Dark Moon Esbats. She also claims to be "The Hologram Queen of the Nine and a Half Ring Realm".

She is a stereotypical popular girl, she steals from a bar, and almost always speaks in questions. She has mad cool hologram powers, she can make hologram versions of herself and she can summon hologram knights to fight for her.

Her hair is always shifting colors, she wears Pink boots, a pink scarf, a dress that seems to change colors, and a gold and black circlet.

Her age is never officially revealed, however, she is a teenager because an angry man yells, "HEY! I told you darn kids to stop hanging out back here!!" to her and her squad. 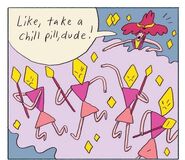