Pendleton "Pen" Ward is the creator of Adventure Time and the original Animated short. Pendleton Ward works for Cartoon Network Studios and Frederator Studios. He was born on July 8, 1982, and grew up in San Antonio, Texas.

Pen became interested in animation at an early age, inspired by his mother, who was an artist and worked with animators. He started drawing flip books in first grade.[1]

At the Adventure Time panel at San Diego Comic-Con 2011, Eric Homer made a surprise appearance, telling a story about Pendleton's childhood. His mother brought him to visit his house to get advice on how to be an animator. However, he couldn't remember what advice he had given to him.[2]

Pen attended CalArts, where he became friends with J.G. Quintel. (They later worked on Flapjack together, and in 2009, Quintel went on to create Regular Show). At a "Producers Show" at CalArts, Pen met Eric Homer from Frederator Studios, which was his first lead in working with Frederator.[1]

In 2002/2003, Pendleton Ward published a webcomic titled Bueno the Bear. He later took down the comics because he thought they were "terrible." [3] However, he retains the name "buenothebear" for his website and his handle on sites like Twitter. Later, Pen created a short for Frederator Studios titled "Barrista" starring Bueno the Bear.

Pen continued to work on short animations for Frederator's Random! Cartoons which aired on Nicktoons. There, he worked with several people who later join him on the Adventure Time series, including composer Casey James Basichis, Adam Muto and Niki Yang. His two shorts were "The Bravest Warriors" and the "Adventure Time" animated short. The "Adventure Time" short was made in 2006 and went on to become an internet phenomenon in 2007, with over 1,000,000 views by November of that year.[4] (Internet searches seem to indicate it first went viral in mid-January 2007, although the original versions of the video on YouTube have since been removed.) Pen pitched Adventure Time as a full series in 2006 or 2007, but it took some time before Cartoon Network decided to pick it up.

In 2008, Pendleton Ward worked on Cartoon Network's The Marvelous Misadventures of Flapjack as a writer and storyboard artist. Flapjack was a storyboard-driven show, meaning that the storyboard artists also wrote the episodes, based on an outline. The experience inspired Pen to run Adventure Time the same way, once it was picked up as a series.[5]

For more on the development of the series, see Adventure Time.

Pen is the creator of Adventure Time, storyboard artist, and its showrunner, meaning that he oversees all creative aspects of the show. He voice acts as Lumpy Space Princess, one of the Businessmen, Shelby, the Snow Golem, and Abraham Lincoln. Also, he voices the Mountain woman in "Memories of Boom Boom Mountain." In the Adventure Time short, Pen is named after him. Pen stated that he changed the name of Pen to Finn because he "didn't want to see his name on the back of sweatjeans." Some of the people he follows on Twitter have done voices on Adventure Time, like Andy Milonakis and Melinda Hill.

Frederator Studios has announced that Pendleton Ward's Bravest Warriors is being developed as a web series for the relaunch of its Cartoon Hangover internet animation channel in 2012.[6] It is based on the 2006 short that Pen created for Frederator's Random! Cartoons. Former Adventure Time lead designer Phil Rynda is working on new character designs for the series. The series premiered during the fall of 2012 through Cartoon Hangover's YouTube channel.[7][8] The first season was 11 episodes long.

The series centers on four teenagers named Chris, Beth, Wallow, and Danny. They go on many adventures and meet many different characters, similarly to Finn and Jake on Adventure Time.

There has also been a KaBoom! comic that releases issues monthly.[8]

In 2011, Pen and Natasha Allegri created a short parody animation called "Pikapew Poop Chu!" that they posted on YouTube. 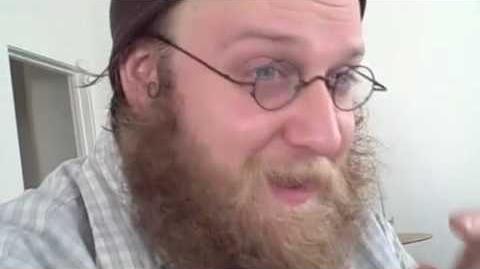 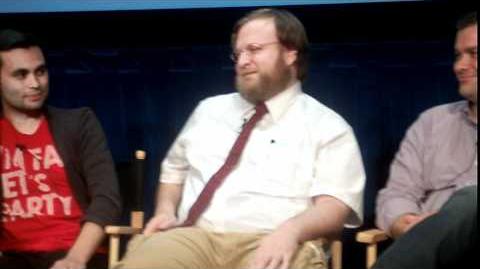 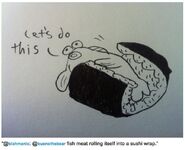 Pendleton Ward as he appears in Mercenary Kings

Pendleton as he is held hostage in Mercenary Kings

Pendleton in the player's camp in Mercenary Kings

Retrieved from "https://adventuretime.fandom.com/wiki/Pendleton_Ward?oldid=582239"
Community content is available under CC-BY-SA unless otherwise noted.