Grey DeLisle
Peanut Princess first appears briefly in Ice King's Imagination Zone in "What is Life?" She then appears in "Loyalty to the King" as one of the many princesses who are interested in the Nice King. She was first told about the Nice King by Lumpy Space Princess. According to "Princess Day" she is a registered princess, and during that episode she expressed her anger that Raggedy Princess hadn't paid her according to a prior agreement with socks and a pair of shorts.

She is a tan colored peanut. Unlike most princesses, she does not wear a dress. She wears a pointy burgundy- and purple-striped hat with a string holding what appears to be an almond. However, in her first cameo, her hat is blue with one orange stripe.

Peanut Princess as seen in "What is Life?" 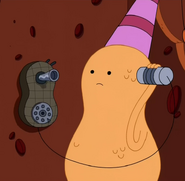 Peanut Princess on her phone