November 17, 1983
Patrick McHale (otherwise known as Pat McHale) is a storyboard artist, writer, and creative director whose work has been mainly with the shows The Marvelous Misadventures of Flapjack and Adventure Time. He storyboarded the Adventure Time episode "The Enchiridion!" and contributed to many episode outlines. He was the creative director for season one and shared the creative director role with Cole Sanchez through season two. In late 2010, he left the job, but continued to have input in writers' meetings.[1] He continued to be credited as part of the story writing team until he left in the middle of season five to create Over the Garden Wall.[2]

McHale is also well known for providing the quotes at the beginning and end of the episode "Ocean of Fear." The character Party Pat in the episode "Belly of the Beast" was designed based on him.

McHale also has a career in independent music. He has written the songs "Oh Marceline," "Dream of Love," and "Something Special" for the series. 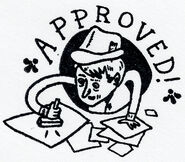