Leader of the Party Bears

Andy Samberg
Party Pat first appears in the episode "Belly of the Beast." He is the leader of the Party Bears partying in the Monster's stomach. Finn and Jake find him lounging on the monster's heart, which Cubby describes as like a "blood waterbed." Finn and Jake try to reason with him to get the bears to leave the Giant, but failing to realize the severity of the situation, they only party harder to the news that they are in a monster's stomach. With help from Finn, Party Pat persuades the monster to let them party in his gut again, in exchange for using gentle laser pointers rather than fireworks. He later reappears in "Billy's Bucket List," hosting the rap battle between Finn and Rap Bear.

He is taller than the other bears of his tribe and is the only one who wears clothing and shoes. He has brown fur, moderately big ears, and brown hair, and he wears a grey-ish green fedora with a red band and a piece of yellow paper sticking out, an olive green jacket with darker olive green elbow patches, a yellow inner collared shirt, grey-ish blue pants, and black shoes, along with a dark grey handbag. Pat is much more human-like than the other bears. It's unknown if he is just a special, mutated bear or a member of a different species entirely.

For the leader of the party bears, Party Pat is surprisingly calm and stoic. He generally sports a blank, unresponsive expression, as if he is deep in thought. He speaks in a calm, decisive manner, giving him something of an air of wisdom, though this may just be a front. Despite his sophisticated manner of speaking, he is not above jovial pranking. He treats partying as a spiritual practice and a way of life rather than just something one does for fun, and he takes partying very seriously. As a result, Party Pat holds partying above all other things, including the safety of himself and his people.

Party Pat in the promotional art for "Belly of the Beast" 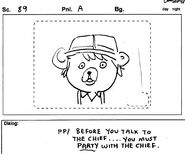 Back and front view of Party Pat 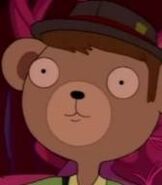