Dee Bradley Baker
The Party God appears in the episode "Power Animal." He appears as a large, floating wolf's head, who wears his hat to one side.

It is shown that if one gains the favor of the Party God, as Jake did, he will grant you one wish. When he grants Jake's wish for focus, he fires a yellow beam from his mouth at him and filled him with the energy of a thousand partying demons, making him destroy everything in his path.

Jake, partying with the Party God.

The Party God, firing his laser. 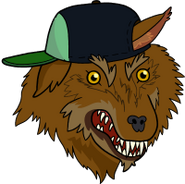