The Party Bears make their first appearance in "My Two Favorite People," where three of them get free power rings from the Forest Wizard. Along with the Forest Wizard, they are scared off when Jake used his Stretchy Powers to enlarge himself and charged into the meadow they were frolicking in. Some of them appear in "When Wedding Bells Thaw," dancing during Ice King's manlorette party montage.

In "Belly of the Beast," they make a new "party cave" inside the stomach of a Monster under the leadership of their chief Party Pat, not realizing where they were or the danger they were in. Though they weren't in immediate danger of being digested by the Giant, they were hurting it with the fireworks they fired off in its stomach. The pained Giant tried more and more extreme means of stopping the pain, going so far as to drink molten lava to drive the bears out. Finn and Jake were forced to go in and try to stop the partying. Finally, after being lead out of the Giant's digestive tract, the bears and the Giant made amends under the condition of using red laser pointers for partying instead of fireworks. The bears are known to make their own beverage, the honey energy drink.

The Bears resemble teddy bears in varying shades of brown with symbols on their bellies. Each bear has a different random symbol (e.g. a hamburger, a tree, a PHIL FACE, a Jolly Roger, etc.).

during the elementals series, in the episode "Slime Central," it was revealed that two Party Bears had assimilated into slime creatures. They both had lightning bolts on their stomachs. They looked similar to how they used to except now their bodies were slime based.

Finn and Jake partying with bears 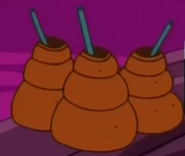 "It's not a party without streamers."